Annamaria
Michael Jackson's "Speed Demon" short film is featured in the Moonwalker film and includes groundbreaking Claymation by director Will Vinton. In the short film, Michael disguises himself as a motorcycle-racing rabbit to avoid a throng of fans and paparazzi.

THE SHORT FILM
Director: Will Vinton

Michael Jackson's short film for "Speed Demon" was the ninth and final short film produced for recordings from Bad, one of the best selling albums of all time. "Speed Demon" was released as a promotional single in the United States, the 10th of 11 songs from the album to earn a single release-an unprecedented achievement.

The "Speed Demon" short film, released as part of Michael's feature-length film Moonwalker in 1989 and featuring the groundbreaking "Claymation" of Will Vinton (who also worked with Michael in a Claymation ad for the California Raisins), was another humorous take on the media attention Michael was receiving at the time and Michael's attempts to escape the attention "in disguise" - wearing a Claymation rabbit head. The short film features a number of Claymation characters, including cameos by The Noid, the Vinton-created spokesperson for Domino's Pizza, as well as caricatures of celebrities like Sylvester Stallone, Tina Turner and Pee-wee Herman and featuring "Spike," a man-sized Claymation rabbit who magically comes to life and engages in a dance-off with Michael after he changes out of the Spike costume.

The dance-off is stopped by a motorcycle cop writing a ticket for Michael dancing in a "No Dancing" zone-ironically getting the "autograph" that the others had sought. As Michael mounts the motorcycle to leave, he smiles as a distant rock formation turns into the winking face of Spike.

The short film for Michael Jackson's "Smooth Criminal" was the centerpiece of the feature film Moonwalker, and featured the debut of Michael's iconic "anti-gravity lean." Inspired in part by Fred Astaire's "Girl Hunt Ballet" dance number in the film The Band Wagon, "Smooth Criminal" was named Best Video at the BRIT Awards, Broadcast Film Critics Association and the People's Choice Awards. 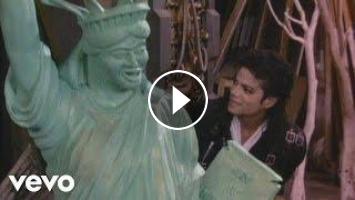 Michael Jackson's "Speed Demon" short film is featured in the Moonwalker film and includes groundbreaking Claymation by director Will Vinton...