The Largest Hydraulic Excavator In The World

RC_Andreas
Original video from HitachiConstruction
hhttps://www.youtube.com/user/HitachiConstruction/video
The Hitachi EX8000-6, launched by Hitachi Construction Machinery in 2012, is currently the largest hydraulic excavator. It weighs 811t and is available with both shovel and backhoe attachments. The first Hitachi EX8000-6 ultra-large backhoe excavator was delivered to Stanwell's Meandu coal mine in Australia in September 2013.
The hydraulic excavator has a 9.9m high cab, is 10.5m long, with an 8.65m wide undercarriage and a maximum digging reach of 20.5m. The excavator has a bucket capacity of 45m³ and a shovel capacity of 40m³, that can remove 75t of in a single load. The crowding and breakout force of the shovel are 2,870kN and 2,230kN, respectively.
The Hitachi EX8000-6 is equipped with two 16-cylinder Cummins QSKTA60-CE diesel engines producing 3,880hp at 1,800rpm. The electric version of the excavator, known as Hitachi EX8000E-6, comes with two Hitachi TFOA-KK electric motors with a total power output of 2,400kW.

The Largest Hydraulic Excavator In The World 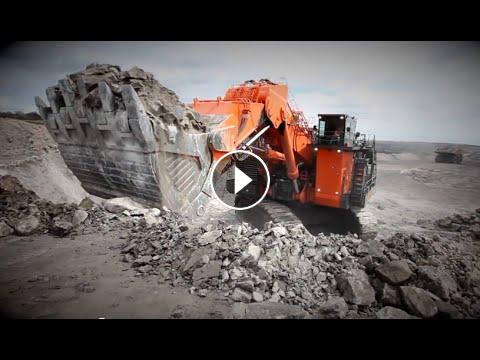