It was perhaps the most spectacular flourishing of imagination and achievement in recorded history. In the Fourth and Fifth Centuries BC, the Greeks built an empire that stretched across the Mediterranean from Asia to Spain. They laid the foundations of modern science, politics, warfare and philosophy, and produced some of the most breathtaking art and architecture the world has ever seen. This series, narrated by Liam Neeson, recounts the rise, glory, demise and legacy of the empire that marked the dawn of Western civilization. The story of this astonishing civilization is told through the lives of heroes of ancient Greece. The latest advances in computer and television technology rebuild the Acropolis, recreate the Battle of Marathon and restore the grandeur of the Academy, where Socrates, Plato and Aristotle forged the foundation of Western though. The series combines dramatic storytelling, stunning imagery, new research and distinguished scholarship to render classical Greece gloriously alive.

EPISODE 1: THE REVOLUTION
The first part tells the story of the troubled birth of the world's first democracy, ancient Athens, through the life of an Athenian nobleman, Cleisthenes. In the brutal world of the 5th century BC, the Athenians struggle against a series of tyrants and their greatest rival, Sparta, to create a new "society of equals." This documentary makes history entertaining as well as educational. Beautifully photographed, using reenactments, paintings, maps, pottery, metalwork, and "living statues" to take the viewer on a vicarious journey through ancient Greece. Episode one, The Revolution, begins at the dawn of democracy in 508 B.C., with the revolution of the common people against aristocratic rule. The film then travels further back in time to chronicle the key events leading up to the revolution. As the camera roams ancient ruins, the Greek countryside, and old stone roads, the viewer learns that the inhabitants of Greece once lived in mud houses with no sewage and frequently fell prey to disease and warfare. Unable to write, they memorized their works of literature in order to pass them on to the next generation. Over time, their hardship and learning whetted their appetite for freedom. After rule by tyrants of the aristocratic class and a struggle for power, Cleisthenes (570-507 B.C.), himself an aristocrat, sided with the common people of Athens and brought democracy into being. From this beginning, western democracy developed and flourished. All the while during their early maturation into a Mediterranean power, Athens and other city-states had to live with the threat of war from expansionist Sparta as well as the vast Persian Empire. But democracy had taken root, and it proved in the long run to be a greater force than the mightiest of armies. The program closes on the eve of the new society's first great test: invasion by the mighty empire of Persia. 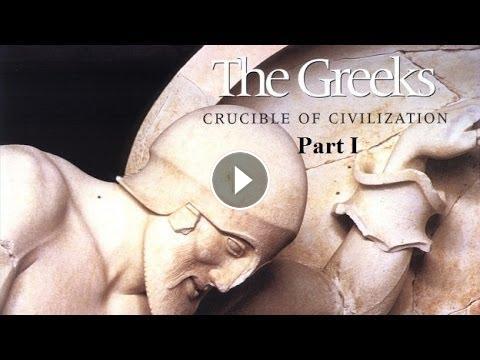 The Ancient Greeks: Crucible of Civilization - Episode 1: Revolution It was perhaps the most spectacular flourishing of imagination and achievement in...